I have found that getting the right scale type propeller for a particular model has often been a problem, particularly when you want one left and one right handed propeller. My local hobby shops have nothing in the way of propellers for boats.  Yes you can buy scale propellers from suppliers over the internet but often you really do not know what it is that you are buying until it arrives in your hand.  Because of this I decided that I would have a go at making my own propellers.

I have made numerous brass propellers for my model ships over the past ten or so years and most have turned out alright. They are certainly not highly polished like the commercial ones nor are they constructed to a standard that considers efficiency or balance but they are functional and scale in appearance.

With this method all of the components are constructed as individual pieces which are then held together with a jig while being soldered together. The basic process for this method is relatively simple although it can be a little time consuming to set up the jig used to hold things together while soldering.

I cut the blades from flat brass sheet and then turn the boss to the desired shape. I then drill and tap the hole in the back of the boss. Small slots are cut into the boss to house the end of each blade. A milling machine can help to do this with accuracy but I have made many propellers just using a hand hacksaw to make these cuts. When all of the components have been made they are all held together in the jig shown below so that they can be silver soldered together. After being soldered the propeller is removed from the jig and it is then cleaned up with files and emery cloth. The tips of each blade can then be twisted with a pair of pliers while holding the boss in a vice or in the chuck of the lathe.

Propellers constructed using this method closely resemble full size propellers and are scale like in appearance. 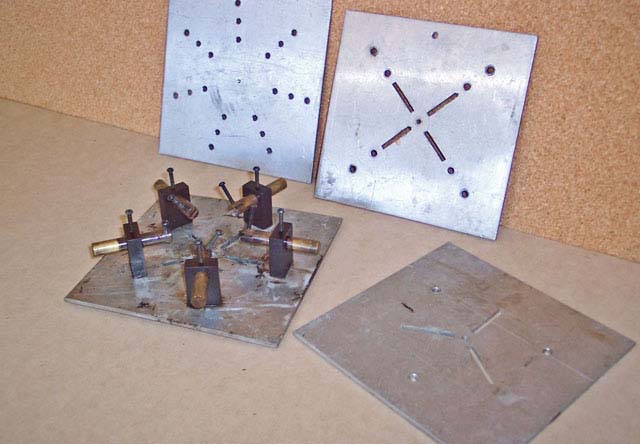 This photo shows the jigs that I use to hold the component parts when silver soldering propellers together. With the four base plates shown I have made 2,3,4,5,6 and 7 bladed propellers of various sizes.

The drawing gives you an idea of how the propeller jig is constructed. With this jig the angle of the blades is adjustable so both right and left handed propellers can be made. The boss of the propeller is mounted on a screw that is screwed through the center of the mounting plate. Each blade is adjusted until it sits snuggly in the slots cut into the boss. 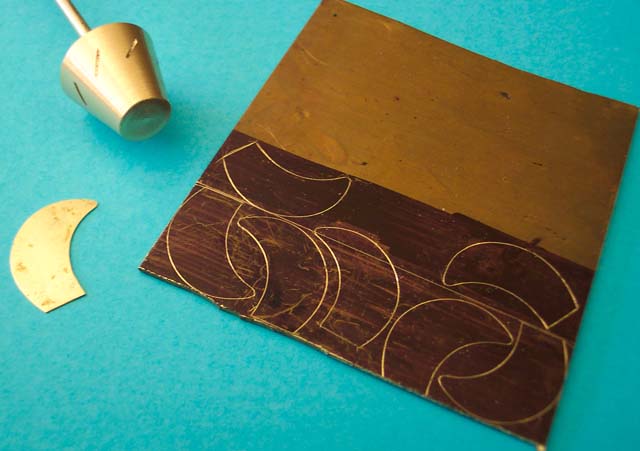 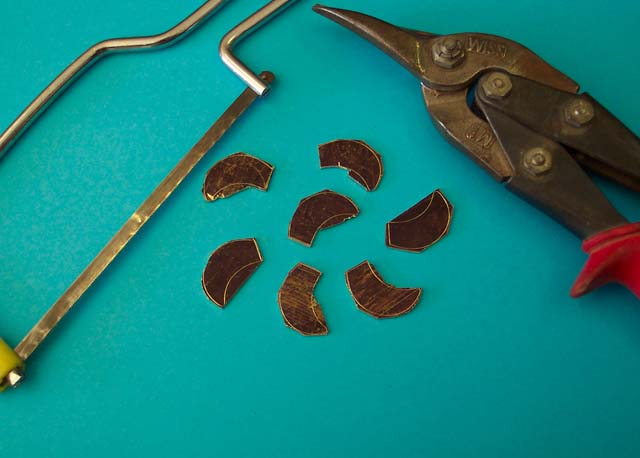 A seven bladed propellers under construction. The boss has been turned and sloted and the blades have been marked out on sheet brass by tracing around the blade template. The individual blades are then cut out and filed to shape. 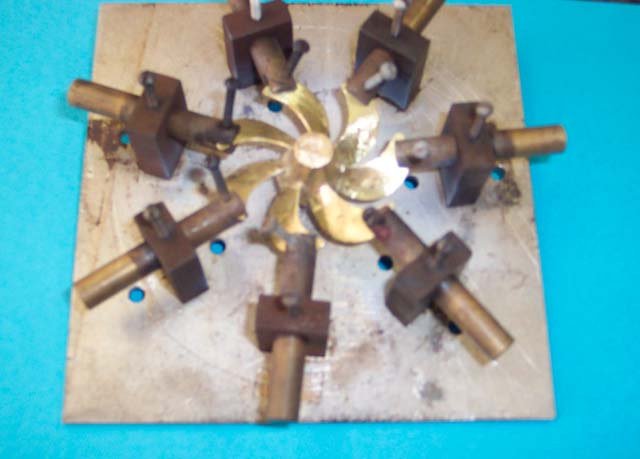 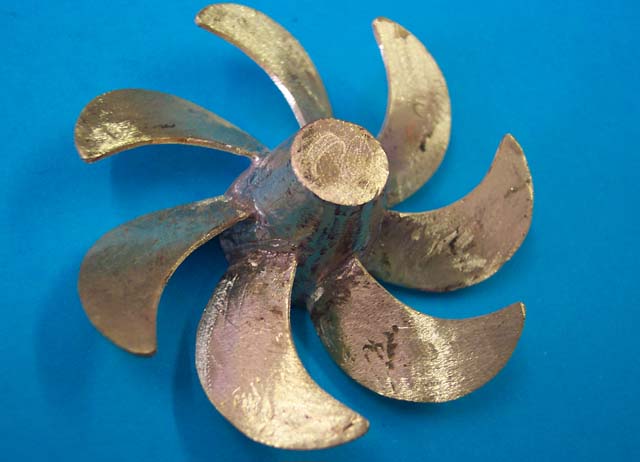 The blades and the boss are set up in the jig and then silver soldered together. The propeller is then roughly sanded and each blade is shaped and then twisted to the correct angle. The propeller can then be polished as desired. 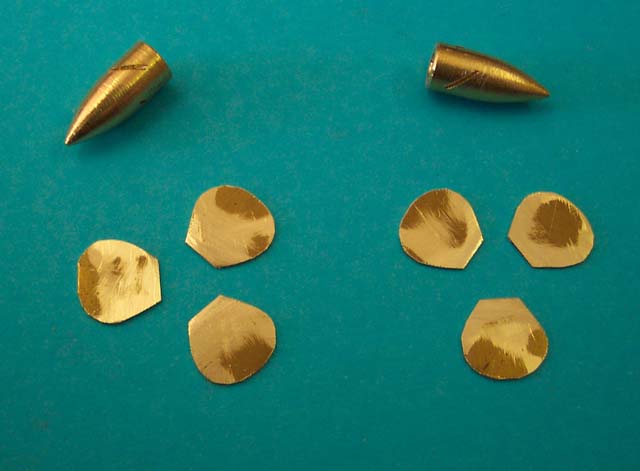 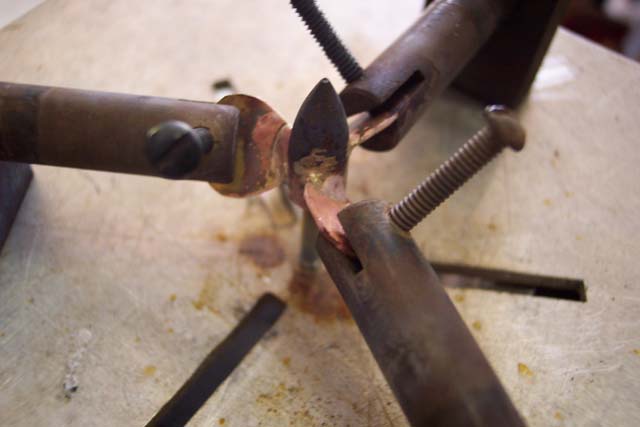 Components for small three bladed propellers. The components are then set up on the jig and silver soldered together.

I use this second method to build small propellers that would be difficult to build up from individual pieces. It is a very simple method that produces acceptable results for small models. I first mark out and cut a brass disc to the appropriate diameter and drill a hole in the center to take the propeller shaft. A small piece of tube is cut and fitted each side of the disc to form the boss of the propeller. These items are all soldered together. The blades are made by carefully cutting the disc with tin snips along the lines previously marked. Each blade can then be filed to shape and then be bent to an appropriate angle with a pair of pliers.

This drawing shows how these simple small propellers are constructed. 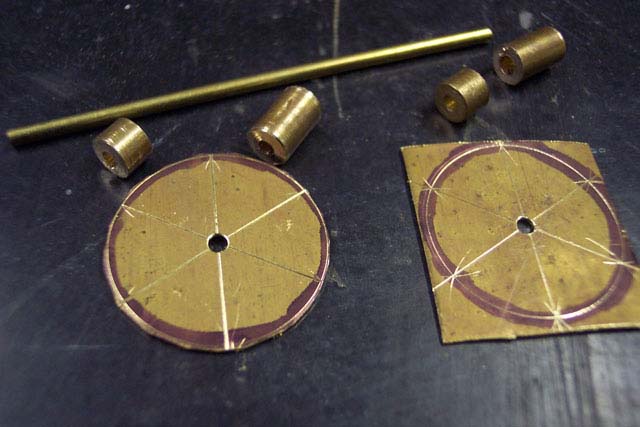 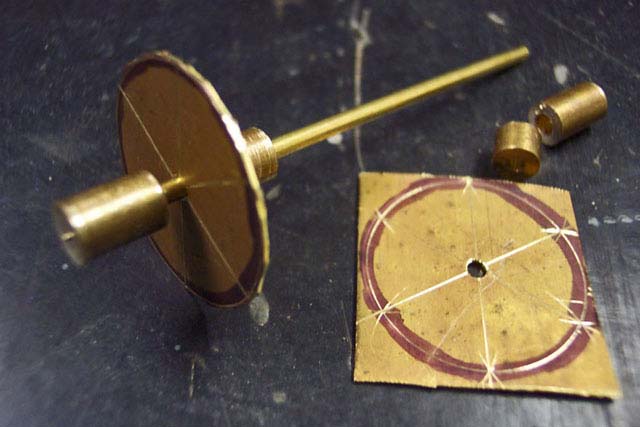 Photos showing the component parts marked up and cut out prior to being soldered together. For these small propellers soft solder can be used but I prefer to silver solder all of my propellers for added strength. 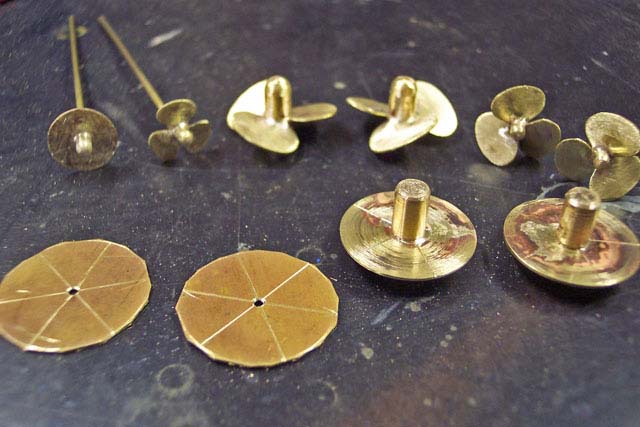 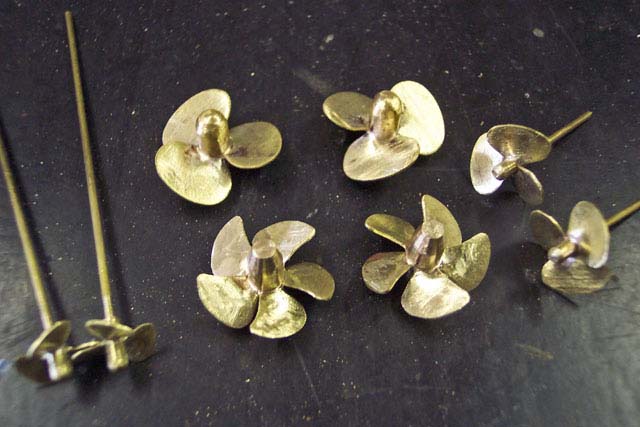