Most of my recent model ships have been made on  fiberglass hulls that I have produced myself. I have generally made the hulls myself because 1; I enjoy building as much as I can on my model ships and 2; in most cases the particular hull has not been commercially available.

Fiberglassing is one of those processes that most people would prefer to leave to someone else. It is messy, the smell gets into everything and some of the chemicals and materials used can be quite dangerous. It can also be quite expensive to set yourself up with all of the appropriate gear, so unless you intend to make more than one model it is probably not worth the cost. To produce an acceptable finished product also requires some experience so if you want to have a go at this I suggest that you do a fair bit of research and talk to others that have the experience. Ideally have an experienced person with you to show you how otherwise you will almost certainly make some mistakes that could be expensive to fix or may turn you off this process altogether. 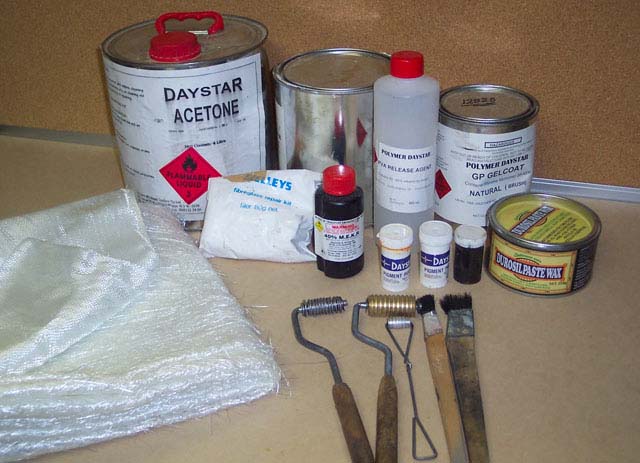 The things that you need to fiberglass a model ship hull can be pretty expensive so it is not really cost effective for a one off model. The photo shows the basic equipment and materials required. Fiberglass mat, acetone, resin, release agent, gelcoat, filler, catalyst, pigment, wax, rollers and brushes are all necessary if you are going to try fiberglassing for yourself.

As most of my model ships are relatively small the task of making a wooden plug and then a fiberglass mould is a little less demanding than it would be if the models were larger.

For my smaller models I generally use MDF (Craftwood) to laminate a hull in the bread and butter style of construction which is used as a plug to form a mould around. After much carving and sanding of this block of laminated MDF and continual checking with templates to ensure that the correct shape is maintained, a solid wooden plug is produced. I then cover the wooden plug in FlowCoat. FlowCoat is a polyester resin type coating that gives good coverage and is easy to sand. When the FlowCoat has hardened it is sanded with various grades of wet-n-dry until a smooth finish is attained. Sometimes it is necessary to give the plug a second coat of FlowCoat, particularly if there are sharp edges to a chine or the transom etc. Once the good smooth finish is attained the plug can be waxed and a fiberglass mould can be made. Once a mould has been completed the hard work is over and the fiberglass hulls can be produced without too much trouble.

For larger models the process is similar except that I generally build the plug plank-on-frame as described on the HMAS Wagga page. The making of the mould is the same just on a larger plug.

My moulds are not particularly rigid nor are they highly detailed like a lot of the moulds of commercial manufacturers . I only make my moulds so that I can produce a fiberglass hull for myself. Although in saying that many of my moulds have been used to make extra hulls for friends as well. 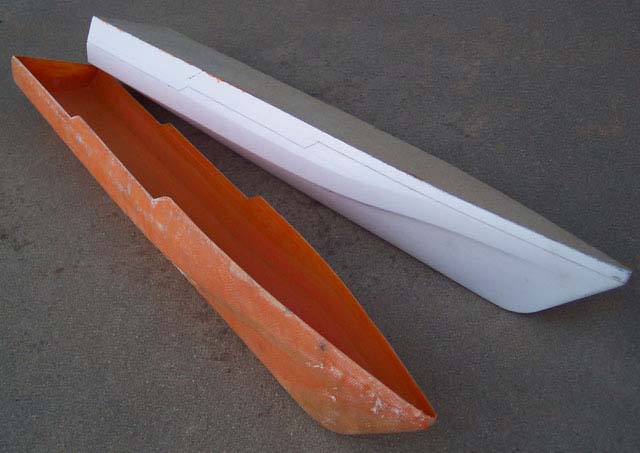 A plug for my Armidale class Patrol Boat made from laminated MDF and a mould that was taken from the plug. 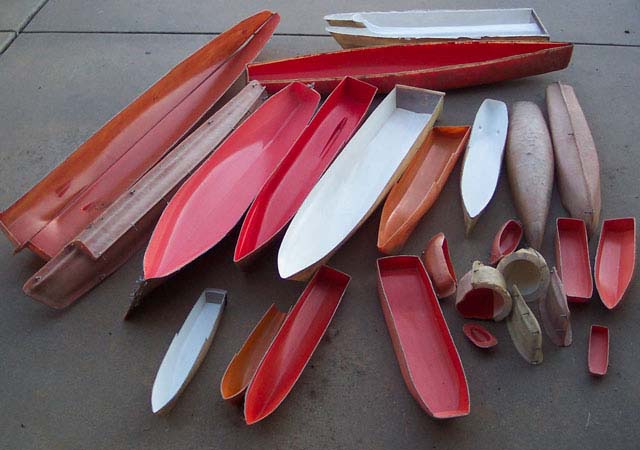 This is a selection of the fiberglass moulds that I have made for my model ships.

As I said previously most of my moulds and therefore hulls are not particularly detailed. Any extra detail that is required is generally added to the hull later on during construction. Things like recesses for anchors or rubbing strakes etc are easy enough to fit to the hull after it has been moulded. My fiberglass hulls are also relatively light in an attempt to keep weight to a minimum. The trouble with light hulls made from polyester resin is that they do flex a fair bit, particularly before you put the deck on. Because of this it is really important to make sure that the measurements for the decks are taken from the plan of the ship and not from the fiberglass hull as there is likely to be a big difference. It is also important to make sure that the hull does not twist when gluing the deck on. I have seen some model ships where the deck is flat and parallel to the water at the front but is several degrees different at the back of the model.

When glueing anything to the inside of a fiberglass hull it is really important to make sure that the area to be glued is first cleaned with acetone. What is not generally acknowledged is that suspended in the liquid resin is a wax and this wax comes to the surface of the resin as it cures and forms a wax barrier between the resin and the air. This barrier stops the resin from remaining sticky but it also stops glue from adhering properly to the fiberglass. So before anything is stuck to the inside of the fiberglass hull the wax has to be removed. It is no good just trying to sand the area as all you will do is clog the sand paper or file etc and you will just move the wax around. Clean the area with some acetone on a cloth first and then roughing the area up with some course sand paper is the best way to ensure that glue sticks to the fiberglass. 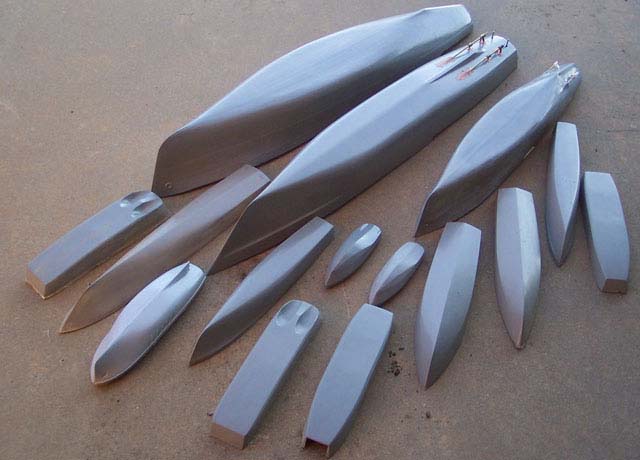 Some of the fiberglass hulls that I have waiting to be made into model ships.